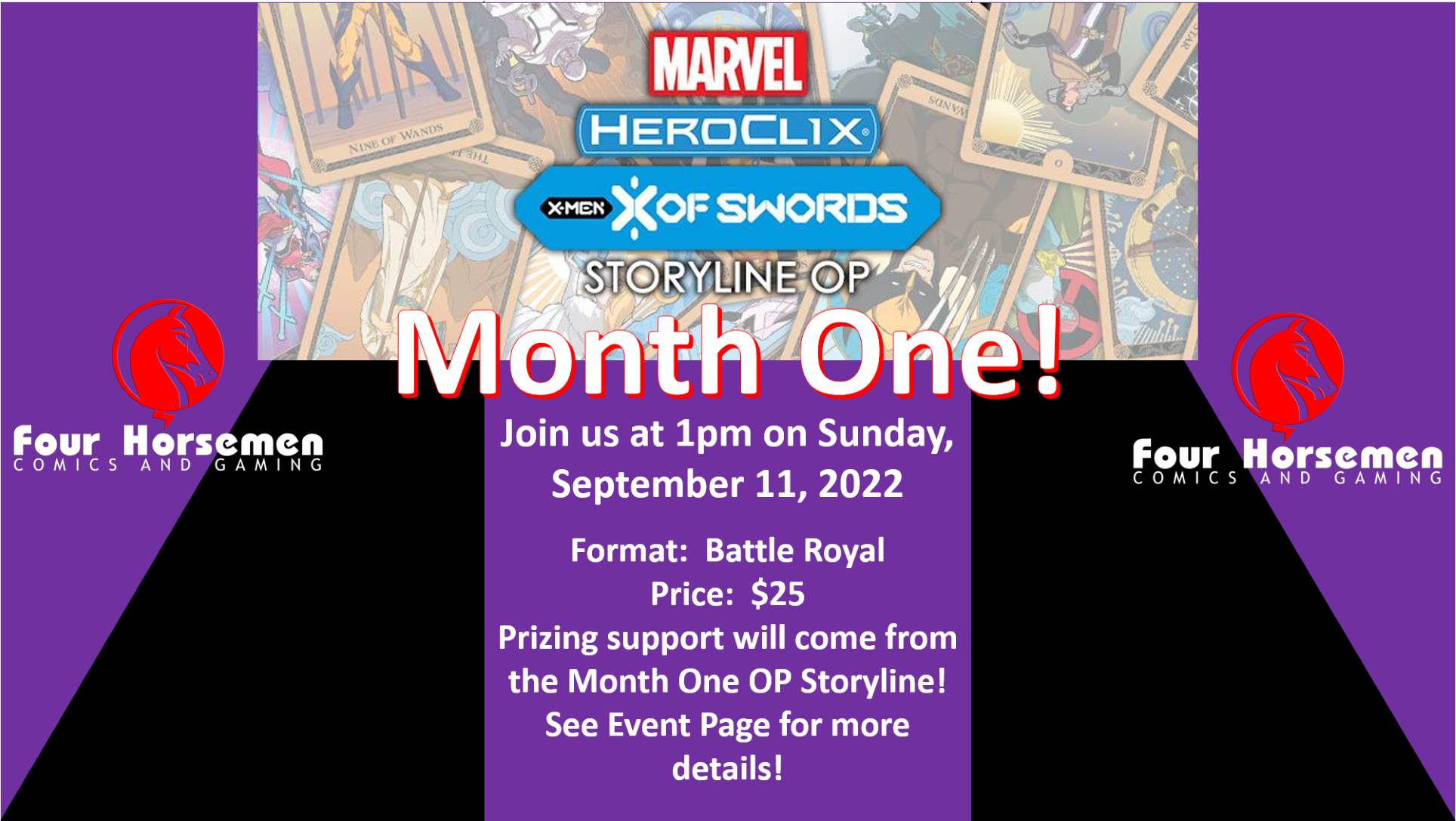 Ten mutant champions. Ten destined swords. Otherworld faces an invasion, and now the tournament to come will determine the future of all realities! Will you stand with the Swordbearers from the new mutant nation of Krakoa, or her fallen “sister” island Arakko? The wheel of fortune turns in Marvel HeroClix: X-Men X of Swords!

EVENT INFO
-Entry Fee: $25
-Format: Battle Royale
-10 Player Cap (reserve your seat by registering for this event in the WIN!)

FORMAT
At the start of the event, players will be placed in multiplayer pods with as close to four players as possible. Each player will receive one (1) Marvel HeroClix: X of Swords Storyline Organized Play Month 1 booster pack. A battle royale map will be given to each pod of players, as well as one of the Participation Prize Tarot Cards to start the Tarot Deck for that game.
When instructed, each player opens their packs and confirms the contents. Players remove the Tarot Card that is included in their pack and add it to a communal Tarot Deck to form a deck of 5 cards (1 Tarot Card from each booster pack plus the 1 Participation prize card that was provided by the event organizer). Starting with the pack that they opened, each player chooses a figure that they wish to draft to their team and takes its associated character card, then passes the remainder of the pack to the player on their left. Players draft the Sword that is included in their pack and takes its associated card. When they receive a booster pack from the player on their right, players then choose one of the remaining figures in that pack (along with its associated character card) to draft into their force then pass the remainder of the pack to the player on their left. This continues until each player has assembled a team of 4 figures (plus associated character cards) and 1 Sword object.
Once players have concluded drafting, the event organizer will set a timer and start the event. At the conclusion of the time period, player standings are determined based on highest total points of game elements KO’d during the game. Players are awarded Tournament Points that count towards winning the Grand Prize for the Marvel HeroClix: X of Swords Storyline Organized Play series according to the chart below:
1st Place: 4 TPs
2nd Place: 3 TPs
3rd Place: 2 TPs
4th Place: 1 TP
If the event has more than 4 players, play will continue. From here on, players will play using the figures they had snake drafted in the first round (see Prizing) below) and will keep those figures at the end of the game. There is no snake drafting after the first round. In subsequent rounds, players will not receive Participation Prizes and will keep their Tarot Cards.
To form a second round, the top 4 players from all Battle Royale pods will play in a Championship Match. The remaining players will play in a Consolation Battle. The winner of the Championship Match will earn the Championship Prize for the event. All players in the Championship Match and Consolation Battle will earn Tournament Points (TPs) toward the awarding of the Grand Prize at the end of the event series.

SPECIAL RULES
For this event, all characters have the following trait:
“SWORD BEARER: This character starts the game with any Sword equipment equipped.”
Additionally, for this event, at the beginning of each player’s turn, for each of their non-bystander characters that were KO’d since their last turn, they may generate a character into a square in their starting area.

PLAYING THE TAROT DECK
During the Marvel HeroClix: X of Swords Storyline Organized Play event series, the use and composition of the Tarot Cards is different from standard game play. The players share a single deck of 5 Tarot Cards that consists of the 4 cards that were pulled from their X of Swords Storyline Organized Play booster pack plus the Participation Prize that was added by the event organizer.
Before the first player’s turn, shuffle the Tarot Cards and place them facedown to form the Tarot Deck for that game. Starting with the first players’ SECOND turn (i.e. after each player has taken a turn), flip the top card from the Tarot Deck. That card will be in play for that round. Before each of the first player’s turns, discard the Tarot Card in play, draw the next card from
the Tarot Deck, and put that card in play. If you cannot draw a card, shuffle the deck and then draw the top card.

PRIZING
At the conclusion of the first round of battle royales, the event organizer gives each player a Participation Prize figure as well as a Participation Prize Tarot Card (one of the cards will be taken from the Tarot Deck). Place all figures drafted from booster packs, their associated character cards, any objects or other game elements, and the 4 remaining Tarot Cards that were used in the Tarot Deck onto the map.
Starting with the 1st Place player, each player chooses a figure or Tarot Card to add to their personal collection. After the 4th player chooses, that same player chooses again. From there the draft order is reversed to 3rd, then 2nd, then 1st. The 1st Place player then chooses again and draft order reverts back to 2nd, then 3rd, then 4th. Continue the above process until all figures have been drafted.
At the conclusion of the event, the player who wins the Championship Match will win the limited edition prize figure for that month (Month One is Saturnyne).

We have a 30-day return policy, which means you have 30 days after receiving your item to request a return.

To be eligible for a return, your item must be in the same condition that you received it, unworn or unused, with tags, and in its original packaging. You’ll also need the receipt or proof of purchase.

To start a return, you can contact us at contact@fourhorsemencomics.com. If your return is accepted, we’ll send you a return shipping label, as well as instructions on how and where to send your package. Items sent back to us without first requesting a return will not be accepted.

You can always contact us for any return question at contact@fourhorsemencomics.com.


Damages and issues
Please inspect your order upon reception and contact us immediately if the item is defective, damaged or if you receive the wrong item, so that we can evaluate the issue and make it right.

Card singles, comics, paint and other consumables are not returnable. To be eligible for a return, your item must be unused and in the same condition that you received it. Your item must be in the original packaging. Your item needs to have the receipt or proof of purchase.

The fastest way to ensure you get what you want is to return the item you have, and once the return is accepted, make a separate purchase for the new item.


Refunds
We will notify you once we’ve received and inspected your return, and let you know if the refund was approved or not. If approved, you’ll be automatically refunded on your original payment method. Please remember it can take some time for your bank or credit card company to process and post the refund too.